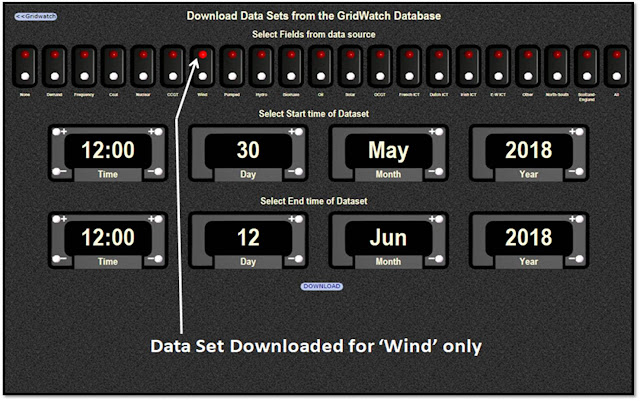 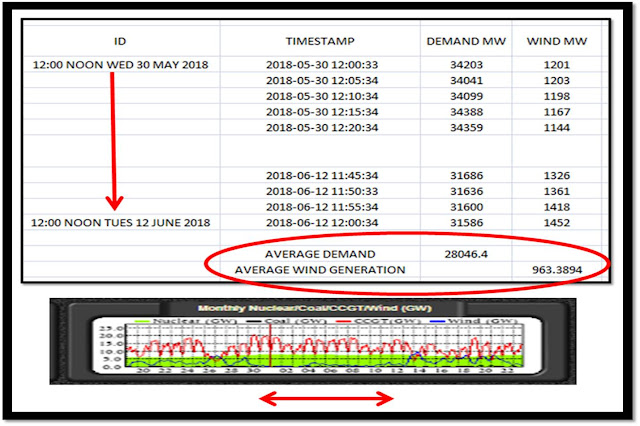 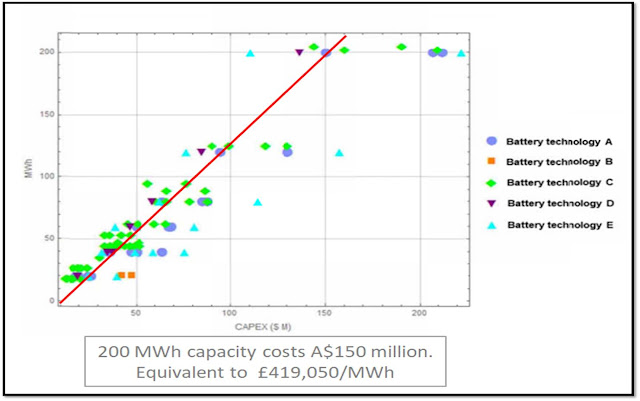 The cost of ‘solving’ a random 13 day intermittency issue is when the idiocy of renewable dissolves into lunacy. Talk of breakthroughs in battery technology and wonderful new storage techniques is revealed as pure dreamland fantasy.


Chernobyl Accident
For Belarus, there is a 15 national estimate of $235B for 1986-2015 attributed to “aggregate damage” and for Ukraine, there is a 25-year estimate for “total economic loss” of $198B. Scaled to 30 years, the Ukraine estimate of around $240B is quite comparable to that for Belarus. In our 2013 report, we identified a population of 10,000,000 as “exposed” in a relatively broad sense to radiation and the disaster, approximately one-third each from Russia, Ukraine, and Belarus.

Thus, tripling either the Ukraine or Belarus 30-year estimates to cover the full exposed population leads to a total of around $700B in costs for the 30 years, assuming the same cost figures apply to Russia. This estimate involves a number of assumptions and must be considered as uncertain, but it is based on governmental figures.

Total [All Nuclear Accidents]: US$0.996 trillion 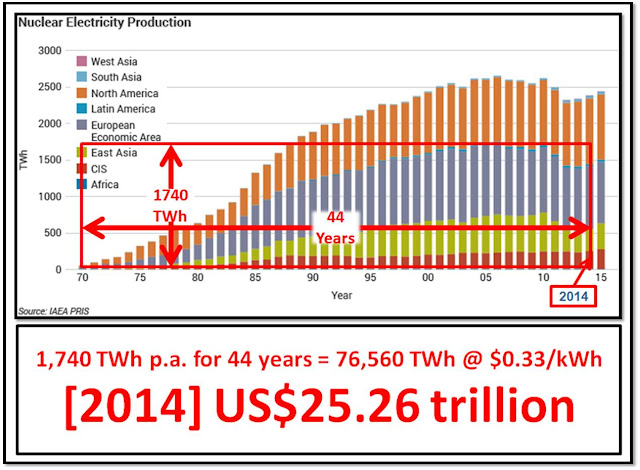 But the USA did not burn all of the coal to generate 76,560 TWh of electricity – and US healthcare costs are much higher than most other nations. 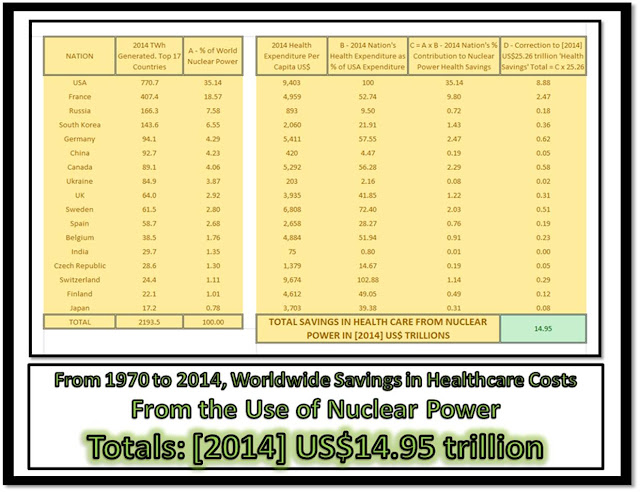 We [the UK] are going back to the Top Table as far as Nuclear is concerned !

Now this is how to deliver a presentation - without hesitation, repetition or deviation - plus a little bit of irony and humour - and with hardly a glance at any notes.

Professor Paul Howarth, Chief Executive of the National Nuclear Laboratory [NNL] implying deals on the future of nuclear have already been done in the Corridors of Power. 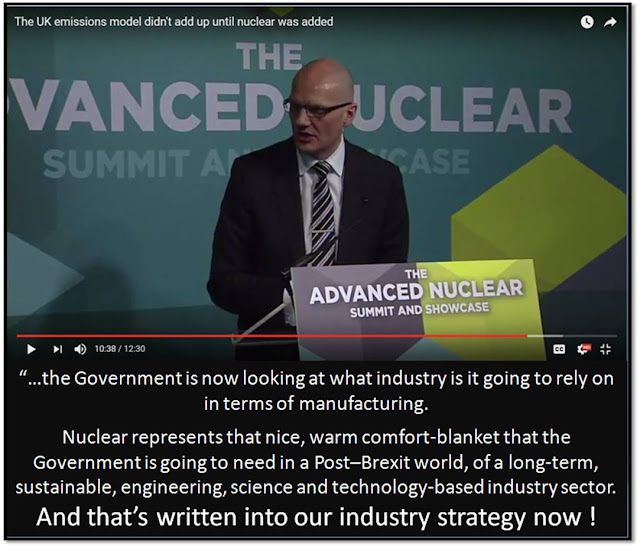 The most optimistic 12.5 minutes of nuclear commentary on the Web.

"…the Government is now looking at what industry is it going to rely on in terms of manufacturing.
Nuclear represents that nice, warm comfort-blanket that the Government is going to need in a Post–Brexit world, of a long-term, sustainable, engineering, science and technology-based industry sector..."

And that’s written into our industry strategy now !
at 8:10 pm 1 comment: 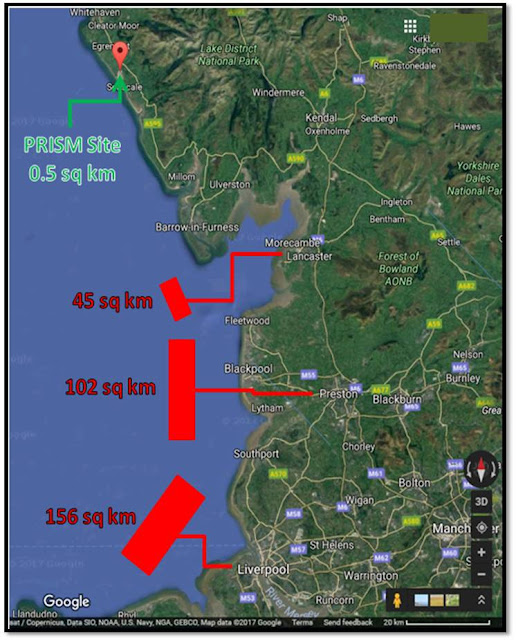 In 2016, 338.6 TWh of electricity were generated in the UK
Government: 2016 Electricity Generated

That means every hour of every day, every man, woman and child in the UK 'used' 594 Watts - that includes the electricity used domestically and by industry, commerce, schools, hospitals - and everything that,
for each and everyone of us, provides our
wonderful way of life.
------------------//-----------------
On a site the size of a large supermarket, the GE-Hitachi PRISM Reactor has an installed capacity of 622 MW. It will operate at 90% capacity factor for 60 years 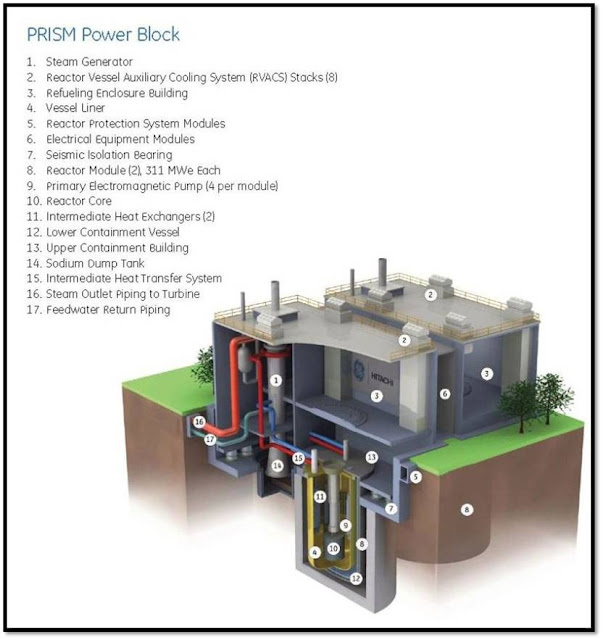 Benefits of the PRISM Reactor 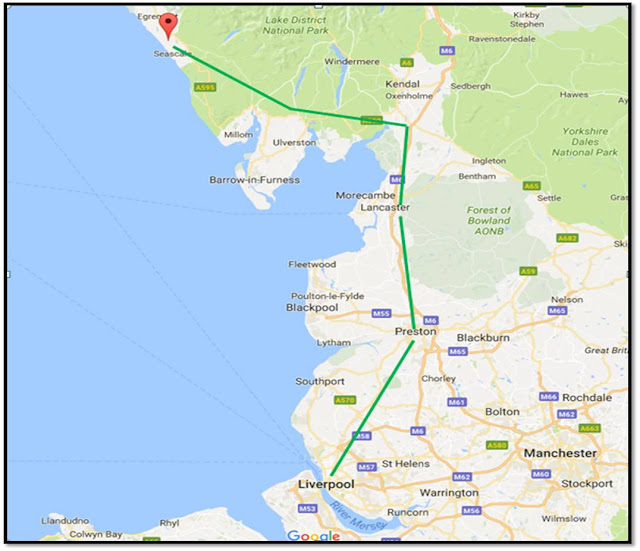 With coal disappearing from the electricity generating scene, a conservative estimation of emissions saved would be to consider displacing gas-fired generation:
"...electricity supplied by gas (320 tonnes of carbon dioxide per GWh)..."
P. 15 - Electricity Generation. CO2 Emissions by Fuel Type

Wind and Solar Power Drain the Lifeblood Out Of The Economy !

Hot off the press:     All in the one Government document - both employment data and TWh generated in 2016, for Solar, Wind and Nuclear Power:
US Energy and Employment Report - January 2017 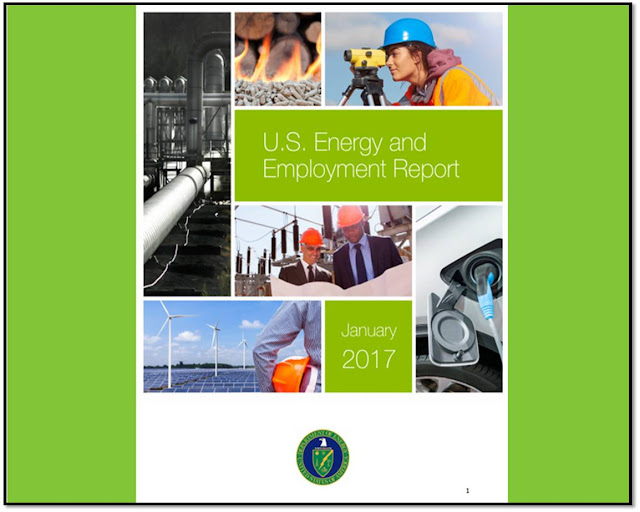 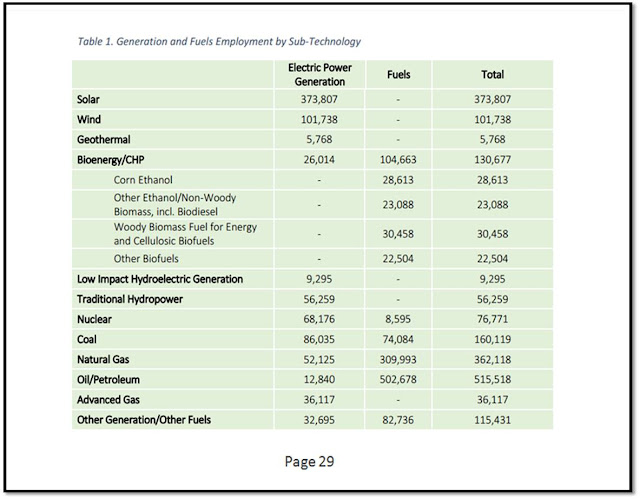 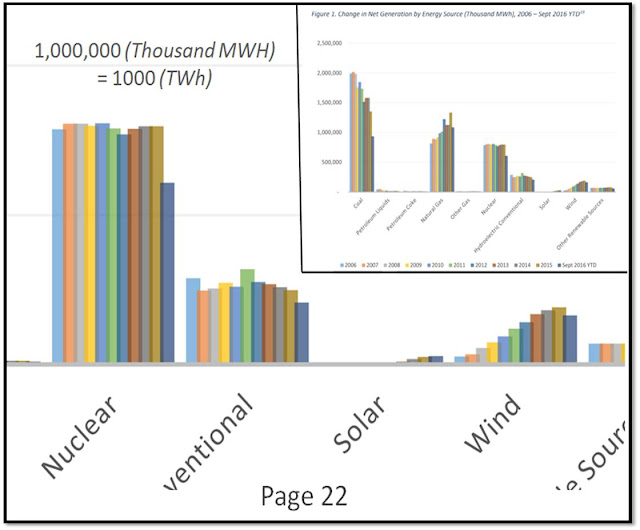 From the enlarged view it's possible measure the bar-lengths and accurately estimate the TWh generated for Nuclear - Solar - Wind, using the 1000 TWh line as a datum. TWh generated for the whole of 2016 taken to be the estimate for 'Sept 2016 YTD' x 4/3.

Green Jobs - Fact or Fiction
"...Energy is the lifeblood of the economy. 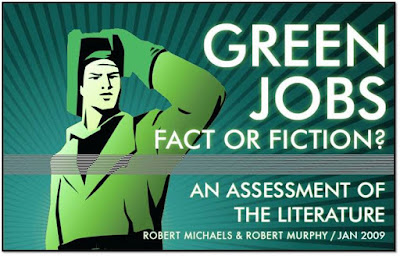 The primary
objective of the
energy sector
is to supply
cost-effective
energy to the
broader economy,
allowing it to
grow and increase the standard of living of its citizens.

Artificially pumping up employment in the energy sector per se - and thereby driving down productivity,
while driving up costs to the broader economy - is counterproductive to overall net job creation and economic growth. It is a sign of increased efficiency if more energy can be produced and delivered with fewer workers, because this expands the overall output potential of the economy..."

The topography of the area is of a relatively flat plateau with occasional hills rising above the flatter plateau landmass, all of which is overlain with deep peat, in some places reaching down past 8 meters.

On top of this is found a mixture of plants that are specialised in living in the low nutrient peat environment and which give the area its distinctive appearance.

One further factor had to come into play for the peat to form of course - a high rainfall (oceanic) climate. This coupled with the underlying geology of Whitelee meant that blanket bog formed over the scarred hills.

No-one knows exactly when blanket bogs began to form but its accepted that it was somewhere between 6000 and 9000 years ago.
Whitelee Landscape 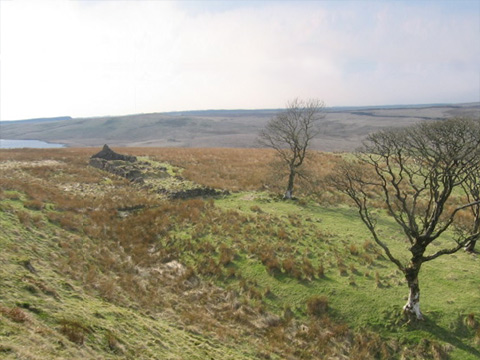 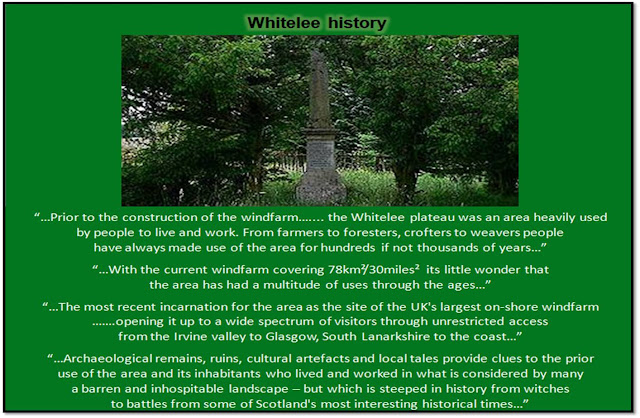 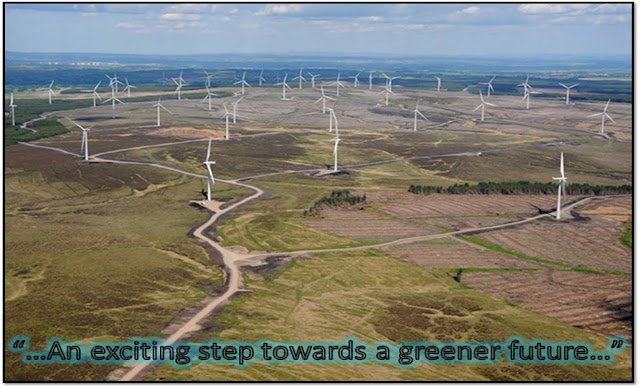 3,200 MW Hinkley Point C [HPC] will operate at 90% capacity factor [cf]. 539 MW Whitelee has a cf of 27%. It needs 20 wind farms the size of Whitelee to generate the same amount of intermittent electricity in a year, as the 24/7 electricity delivered by HPC. 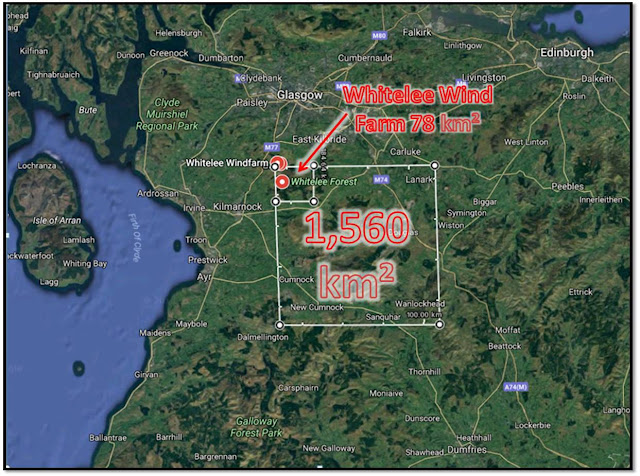 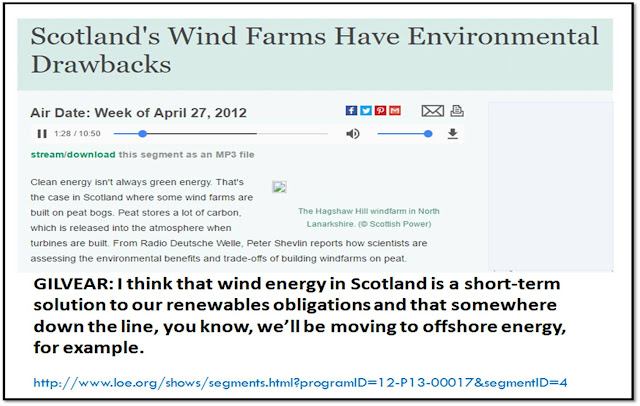 6,000 to 9,000 years of carbon storage - then it's all released in an instant. And for what? To cut an *unknowable* amount of greenhouse gas emissions